In 1628, four years after the founding of the Dutch colony of New Amsterdam, Reverend Jonas Michaelius arrived from Holland to organize what is now known as the Collegiate Church of New York, whose oldest remaining building is Marble Church. As the first ordained minister in New Amsterdam, Reverend Michaelius conducted the first worship service in a gristmill on what is now South William Street, when the entire population of the city was less than 300. The first church elder was Governor Peter Minuit, who had recently purchased Manhattan Island from the Native Americans. Peter Stuyvesant, Director General of New Amsterdam, led worshippers to Sunday service and would impose a fine on anyone who did not attend church!

When the British took over the city in 1664 and renamed it, New York, they allowed the Dutch Reformed Church to continue its worship traditions. King William III granted the church a Royal Charter in 1696, making the Collegiate Church the oldest corporation in America.

In the mid-nineteenth century, congregants were surprised to learn that their new church was to be built near a dairy farm, north of the city limits which ended at 23rd Street. At that time, Fifth Avenue was a dirt lane that turned into knee-deep mud during rainstorms. An iron fence was needed surrounding the new church to keep out the livestock. (Much of that iron fence remains today.)

On October 11, 1854, the new church was dedicated. Designed by architect Samuel A. Warner, the church was constructed from huge chunks of white marble quarried in Hastings-on-Hudson in Westchester County. Designed in the Neo-Romanesque Gothic style, Warner created a soaring, open interior, featuring “cantilevered” balconies with no visible means of support. Marble is believed to be the first church in America to utilize these “free-hanging” balconies, which offer superior sightlines and acoustics.

The dramatic 215-foot steeple resembles that of a New England wooden church, topped by an original Dutch-style weather vane with a rooster, a reminder of the cock that crowed three times after Peter’s denial of Christ. The tower’s bell has tolled upon the death of every President since Martin Van Buren in 1862. Another church bell sits in the churchyard at the corner of Fifth Avenue and 29th Street; it was cast in Amsterdam in 1795, and formerly hung at the Old North Church on Fulton Street.

The first worshippers entered a church that was sparkling white on the inside as well as the outside, with sunlight pouring in through clear glass windows. The chancel featured a raised pulpit draped in crimson velvet and satin. In keeping with Calvinist tradition, there were no crucifixes, icons, or images of Christ, thus keeping everything focused on the message. The original mahogany pews with swinging doors (to keep out the draft) are still in use today. Their brass numbers are a reminder of the days of family pews and reserved seating. The chairs on the chancel and the marble and mahogany communion table are also 1854 originals. 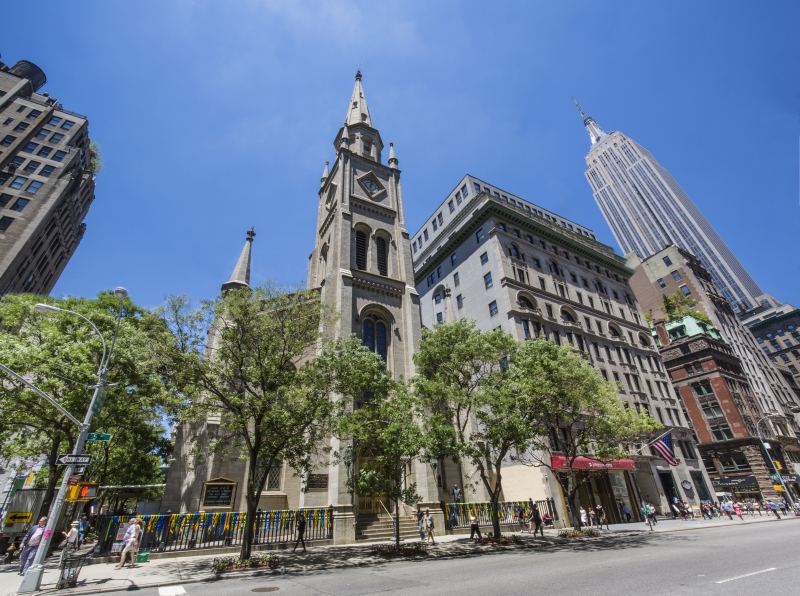 Soon after the church opened, Fifth Avenue was paved and became a lovely tree-lined boulevard sporting the handsome brownstone townhouses of New York’s wealthiest families – the real “Fifth Avenue” of fame. In 1891, Marble Church underwent an extensive renovation and became one of the first churches in America to receive electricity, replacing its gas lights with incandescent lamps and installing the city’s first electric organ. (In 1984, a new organ was built by Austin Organs of Hartford, Connecticut. The current pipe organ, designed and voiced by Sebastian M. Glück, was dedicated on October 18, 2015.) Diamond-shaped stained glass windows replaced the clear ones (several still remain on the stairways to the balconies), the elevated pulpit was removed, and the walls were painted in burgundy and gold. The church looked much as it does today.

In 1900 and 1901, two stained glass windows by the celebrated studios of Louis Comfort Tiffany were installed in the south wall (“Joshua Leads the Israelites” and “Moses and the Burning Bush”). Thus began a century-long project of replacing all ten of the Sanctuary’s stained glass windows with radiant new designs by a variety of artists, based on biblical stories.

Responding to the needs of its growing congregation, excavation began in 1937 for Burrell Hall, directly beneath the Sanctuary. In 1958 Marble acquired the 10-story building at 3 West 29th Street, which opened in 1961 after extensive renovation, for overflow and fellowship rooms, classrooms, and offices. In May 1965, Poling Chapel was dedicated, featuring sculptured-glass windows from Chartres, France. An enchanting Children’s Chapel, a gift from Valerie and Dick Doll, was dedicated in November 2007.

Marble has been witness to much history marching past its doors, including the funeral processions of Presidents Abraham Lincoln and Ulysses S. Grant. In the surrounding neighborhood, the first Madison Square Garden, Delmonico’s Restaurant, the original Waldorf Astoria Hotel, and the famous “Tin Pan Alley” (one block south on 28th Street) have all come and gone during Marble’s tenure.

Dr. Florence Pert was the first ordained woman minister in the history of the Collegiate Churches in 1987, and a beloved friend to many.

Today, a new Concourse level underneath our Sanctuary boasts a beautiful Chapel, Columbarium, and Labyrinth Room. Our Labyrinth is a rare indoor, walkable, and permanent labyrinth that allows the user to experience walking prayer.

In 2017, The Collegiate Churches of NY (including Marble), while remaining part of The Reformed Church in America, added an additional denominational affiliation with The United Church of Christ.

Marble Collegiate Church is part of the Reformed Church in America, formerly known as the Dutch Reformed Church. The term “Collegiate” refers to the practice, imported from Holland, of rotating ministers who would take turns preaching at the various churches. This practice ended in 1871 when Dr. William Ormiston was installed as Marble’s first Senior Minister. He routinely filled the sanctuary at all three Sunday services and served faithfully until 1888.

Dr. David James Burrell accepted the call as Marble’s second Senior Minister in 1891 and oversaw the redesign of the church’s interior. He was responsible for many of Marble’s outreach programs, including sponsoring the Sunshine Mission in Hell’s Kitchen and initiating the printed sermon booklets.

Dr. Daniel Poling came to Marble in 1920 and eventually replaced Dr. Burrell upon his death in 1926. Dr. Poling served as a military chaplain in both World Wars, and traveled the world as “America’s Spiritual Ambassador of Good Will.” During his tenure, outdoor services were held every weekday in an “Open Air Pulpit” on 29th Street. Dr. Poling's son, Reverend Clark V. Poling, was one of the Four Chaplains who gave their lives for their country when the troopship SS Dorchester was torpedoed in 1943. Dr. Poling served Marble until 1930.

By that time, the Depression had decimated Sunday attendance. One day in 1932, when the scheduled Sunday minister turned ill, a frantic search for a last-minute replacement uncovered an unknown Methodist minister willing to substitute. His name was Dr. Norman Vincent Peale, and after that service, Marble Church, and modern Christianity would never be the same. He served for 52 years as Senior Minister with the help of his devoted wife, Ruth Stafford Peale and would transform Marble into one of the world’s great churches. He created newspaper columns, radio, and TV shows, and authored 46 books, including The Power of Positive Thinking (1952), which has sold over 20 million copies. Marble’s Sunday attendance leaped from 300 to over 3,000. The Peales’ legacy lives on today through the Peale Foundation and Guideposts magazine. A life-sized bronze statue of Dr. Peale, sculpted by John M. Soderberg, was installed in the Fifth Avenue churchyard in May 1998 to mark the 100th anniversary of his birth.

Dr. Arthur Caliandro joined the staff in 1967 and was appointed Marble’s fifth Senior Minister upon Dr. Peale’s retirement in 1984. He soon expanded Marble’s ministries, installing women in powerful church positions, initiating the Partnership of Faith to strengthen ties between Protestant, Catholic, Jewish and Muslim communities, and leading the church in prayer vigils for peace. Dr. Caliandro is remembered for his endearing personal sermons. He retired in January 2009, after 42 years of faithful service.

Dr. Michael B. Brown was installed as Senior Minister in February 2009. Dedicated to Marble’s legacy of acceptance and outreach, Dr. Brown expanded the church’s ministry worldwide via interactive technology and reached 144 countries. Each Sunday worshippers joined us online from over 20 countries and over 40 states. Through Worship, his TalkBack sessions and online Small Groups, Dr. Brown made it possible for people to truly feel they were part of the Marble Community no matter where they lived. His warm, insightful sermons touched the heart and illuminated the spirit. He retired from Marble in April 2018.

In late April 2018, Marble was honored to welcome Dr. Michael Bos as our Senior Minister. His history of building interfaith understanding based on God’s all-encompassing love can help transcend any divisions the world may try to erect, and through his relatable, life-affirming sermons he encourages each of us to be all God created us to be. Under Dr. Bos’ leadership, Marble’s future is very bright indeed.