The Marble Labyrinth will reopen by mid-September for walks a few times per month. Exact dates and times to be announced. Check the Sunday bulletins, our website, or contact Judy Tulin for more information.

At Marble Collegiate Church we have one of the only indoor, permanent, walkable labyrinths in New York City available to the public on a regular basis. Ours is based on the design of the labyrinth inlaid on the floor of Chartres Cathedral in France dating from the thirteenth century. It is the first such labyrinth to be built in the city in over 80 years, and the first built in the 21st century.

Labyrinth walks at Marble Collegiate Church are open to all:

Our Labyrinth Facilitators will be available to help guide you and answer any questions you may have, while allowing you the space to walk in your own way, at your own pace. Please scroll down to read more about our Labyrinth.

How to Walk the Labyrinth

The Three Stages of the Walk

Releasing: Each step taken along the pathway into the center represents a releasing, letting go of the busy day-to-day details in your life, shedding thoughts and emotions, quieting and emptying the mind.

Receiving: When you reach the center, stay as long as you like. It is a place of meditation and prayer. Be open to receive what is there for you to receive.

Returning: Leaving the center, follow the same path out, taking back with you into your daily life whatever you have learned on your walk.

Solvitur ambulando - It is solved by walking. – St. Augustine

What is a Labyrinth?

A Labyrinth is a personal walking meditation, a body prayer traversed on a single path for personal, psychological and spiritual transformation. The winding path becomes a mirror for where we are in our lives; it touches our sorrows, releases our joys, and guides us into the experience of the presence of God.

Labyrinths have been used as a spiritual tool in cultures around the world for thousands of years. They began to appear on church walls and floors around 1000 C.E., an archetype of a divine imprint. There are even examples from churches in the Roman Empire and are found in various forms in many religions and cultural traditions around the world.

A labyrinth is not a maze, as a maze has many paths and dead ends; in a labyrinth there is only one path leading to a central point. One follows the same path in as you do on the way out. In a maze you lose yourself; in a labyrinth you find yourself.

This is what the Lord says, “Stand at the crossroads and look; ask for the ancient paths, ask where the good way is and walk in it, and you will find rest for your souls.” – Jeremiah 6:16

How Marble came to have a Labyrinth

I first learned about labyrinths in 1999 and as I learned more, I began to realize what powerful spiritual tools they are. At that time, I was a member of the Spiritual Enrichment Committee (SEC), now known as the Marble Prayer Ministry, and felt that Marble should have a labyrinth as a tool for Spiritual Enrichment. I approached Rev. Dr. Rob Williams, then pastoral advisor of the SEC, and proposed that Marble purchase a labyrinth. Both he and Rev. Kimberleigh Jordan were supportive of my proposal. With the approval of Marble’s Senior Minister at the time, Dr. Arthur Caliandro, they ordered a labyrinth from Labyrinth Enterprises in St. Louis. It was a 29.5 foot canvas with the Chartres Cathedral design in dark blue on white, and was purchased in 2001 using funds donated by me and supplemented by Marble. It had three pieces of Velcro holding it together so that it could be taken apart for storage when it was not in use. It is still here and is used for retreats held outside Marble, and is loaned out to other churches and organizations for a donation.

From 2004 until the renovation of Burrell Hall which began in 2010, I led labyrinth retreats in the fall and sometimes in the spring as well. The labyrinth was laid out every first Wednesday before and after Wednesday Worship and every Wednesday during Lent.

When the renovation of Burrell Hall was being planned, someone made the remark that there should be a room with enough space for the labyrinth. John McHugh, Marble’s Property Manager, said, “..or we could install a permanent one.” And that is what happened. Our current labyrinth began as a wire armature which our former minister Rev. Kirsty DePree and I walked and blessed when it was first installed. The marble was poured into the frame to make the black on white Chartres design as you see it today. As far as we have been able to determine, it is the only inlaid marble walkable labyrinth in the five boroughs. Since November 2012, it has been available for walking every Wednesday from 5:00 to 6:00pm and every first Sunday from 1:00 to 3:00pm. It is also used by program groups for intreats as well as for all-church intreats.

It is my hope and expectation that it will continue to provide spiritual connection and nurture to all those who walk it for many years to come. And I hope you will take some time soon to walk the labyrinth and connect with your inner spirit with a walking prayer. 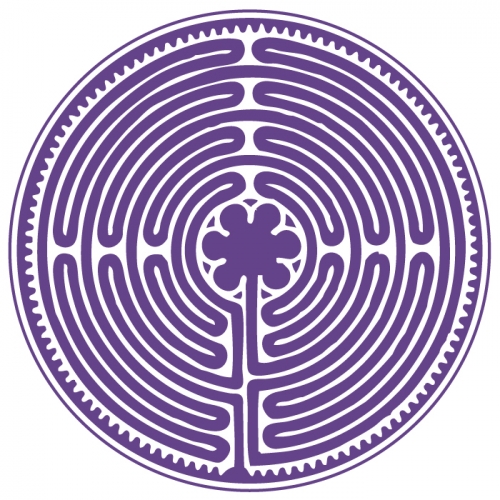 If you can’t walk the Marble Labyrinth in person, “walk” the image of the labyrinth by tracing the path into the center and then back with a finger of the non-dominant hand.